Ngala's accommodations were very nice. We had the front half of a duplex cottage. They were arranged so that you really weren't aware of the other half. I trust that was true for the other side as well. The bed was comfortable and the bathroom spacious. Though not as luxurious as Londolozi, it was delightful and far more than adequate. I really enjoyed the porch. Ours looked out across a grassy area toward the watering hole and the dining and lounging decks. The watering hole drew many visitors, most notably herds of buffalo who came to drink and warthogs that grazed on the grass. There were monkeys in the trees as well as squirrels, and a small antelope called a Duiker which grazed on the forest floor. Here are some pictures of our room and the camp. 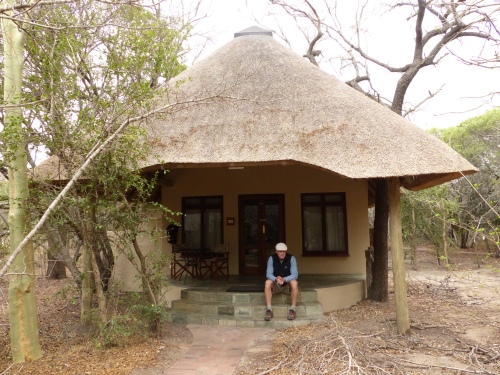 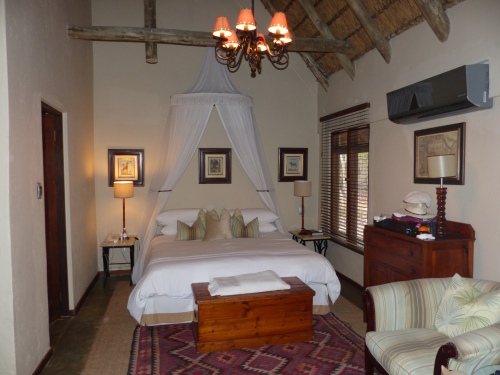 Baboon on the roof 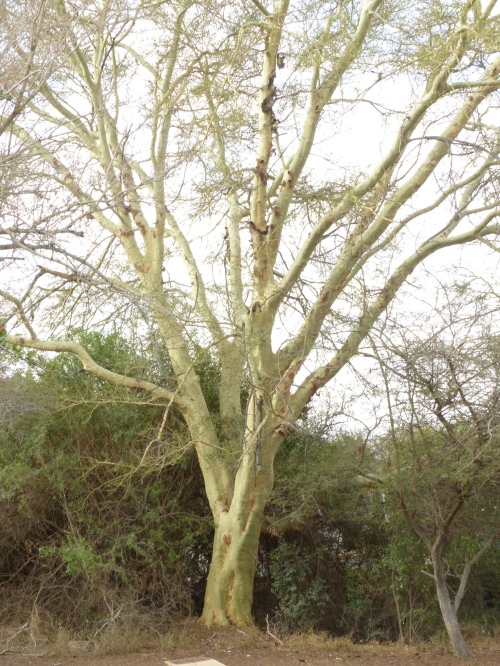 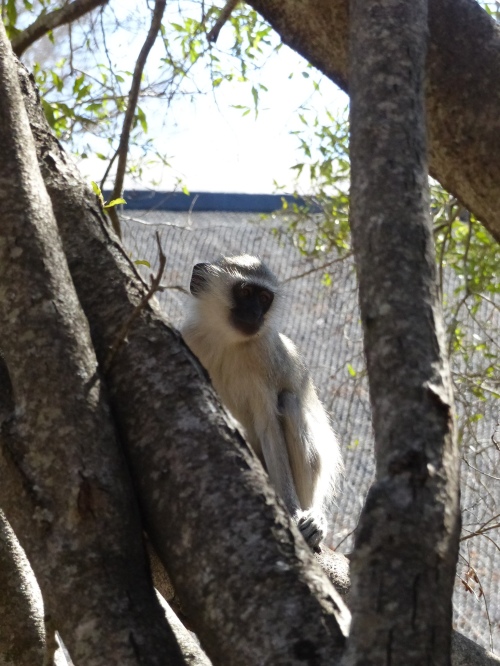 At the watering hole 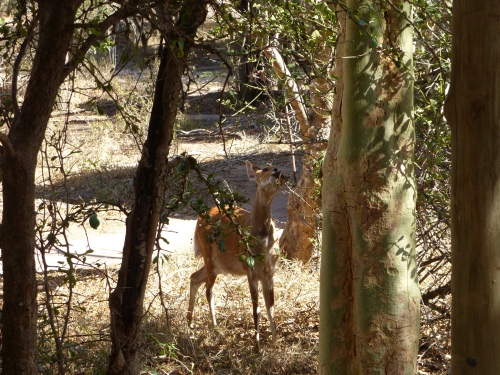 The food at Ngala was also very good. We enjoyed the buffet at lunch time which always included some wonderful salads. It's hard when you are traveling to try to keep a handle on one's diet. At the safari lodges they feed you so often it's very easy to over indulge. And then when you are traveling elsewhere, you eat out a lot. So salads were appreciated.

Each night we had a different experience at Ngala. The first night we ate dinner in the courtyard. This was a walled area lit with lanterns. It was quite beautiful, but as we discovered, Ngala does a nice job with the ambiance for every meal. The second night we were treated to a bush dinner. On the way back from our evening game drive, in the dark, Bernard detoured to a clearing in the bush where the staff had set up a bush dinner for all the guests. The clearing was lit by lots and lots of lanterns and there were wood fired barbeque's in use cooking our food. From a distance you just saw twinkling lights appearing out of the bush. It was quite a feat to set up a full dinner service buffet in the middle of the bush and it was executed flawlessly. One can't fault the staff for the the flying beatles attracted to the lights. We were protected from the hyenas by armed guards who patrolled just on the edge of darkness. It all felt very safe.

On the next night we returned from the evening game drive to find a romantic, lantern lit table set up on our porch for a private dinner. Given served us and it really was quite nice. He had already provided our preferred beverages waiting for our arrival. Our last evening turned out to be a Boma dinner. This was another enclosure off the main dining area and Bernard joined us for dinner. With a fire pit going and another buffet it was yet another lantern lit feast.

Ngala has a nice pool which we used one afternoon. There were lovely chaise longues and umbrellas, bottled water and towels, all provided. Michael went over a bit sooner than I and he said an entire family of warthogs paraded past the pool before I arrived, one after the other like a little train. I enjoyed seeing them later on the grass by the watering hole. The warthogs kneel on their front legs while they root around in the dirt and grass with their bottoms sticking up in the air. They move around on their knees without getting up while they're doing this. A lot of times the most common view of the wildlife is from the backside, so I decided to start a collection of “African bum shots”. I'm working on photographing the backsides of as many animals as I can. The warthogs are quite obliging with this. 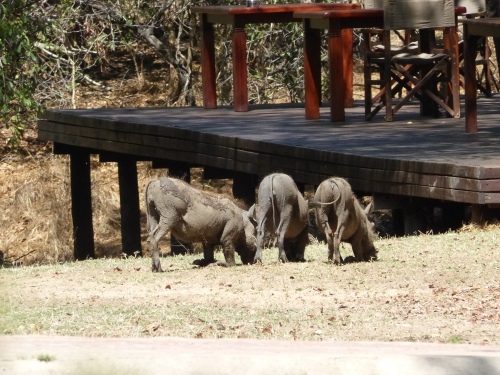 The people at Ngala were uniformly friendly and some of the most genuine and warm people we've met. Given, our butler, was always smiling. Mama Connie, whose official function I'm not quite sure of, was always making sure people were happy and cared for. The Rangers were all professional, polite, and eager to please. I would highly recommend Ngala Safari Lodge for a wonderful experience with superb game viewing. Their standards are vey high.