Sorry for the hiatus in posting. The holidays, winter illness, and life in general have slowed me down. However, I do promise to finish the tale of our journey in Africa.

The day we left Cape Town bound for Botswana we rose early and collected a packed box breakfast from our hotel since we were too early for the served breakfast. The drive to the airport was easy and fast, and the car rental return was both close by and quick. Cape Town’s airport was refurbished and updated when South Africa hosted the World Cup soccer championship in 2010. It is of a good size and modern without being too big. Because we had rather a lot of luggage, a porter helped us into the terminal from the car rental return which is in the parking garage adjacent. He was quite a character! He was the #2 porter at the Cape Town airport and had been working there for at least fifteen years. I am sorry that I did not write down his name. The porters have numbers that are given to them when they start work, so there was only one other porter who had been there longer. With his assistance we found the VAT Refund desk, took care of our business and located the check in counter for our Air Botswana direct flight to Maun, Botswana. The re-packing of our luggage after showing purchases to the VAT desk was a bit comical! I quickly determined that it wasn’t all going to fit in our suitcases. So we found a luggage shop and bought a cheap duffle bag. This solved the space problem but we still spent some time on the floor of the airport with all our bags open rearranging things to protect the fragile stuff. A rather bemused ticket agent looked on. Sometimes when you find yourself in an embarrassing situation when you travel you just have to suck it up and accept it.

Fortunately we had allowed plenty of time to accomplish all this and had no trouble checking in for our flight and finding the gate area. Unfortunately our flight was delayed. They never told us why or for how long. We just sat there until they finally called us for boarding. It turned out they had decided to switch equipment and use a smaller plane. Even so, it wasn’t totally full. The bad part was that after a delay to board the flight, the smaller plane took at least an hour longer to make the journey (prop vs. jet). So in the end, we arrived in Maun, Botswana quite late. Maun is a small town with a tiny airport that serves as a gateway to the Okavango Delta and its safari lodges. The lodges in the Delta are mostly accessed by small plane so Maun is where you pick those up. After clearing customs in Maun we were met by the staff of Wilderness Safaris. They were quick to take our extra luggage for storage, give us bottles of water, and stand in line for us to check in for their flight to Chitabe, one of their lodges in the Delta and our first destination. They hurried us along through security and out to the waiting plane with one other couple. The weather was looking a bit iffy with a thunder shower headed our way and clearly they had been anxious to get us out of there. I sat in the co-pilot’s seat with Michael and the other gentleman behind in two seats and the other woman in the back seat. You couldn’t have fit any others the plane was so small! We taxied and took off just as the rain started. Lightning flashed occasionally and I wondered if little planes ever got struck. To his credit, our pilot did a masterful job and we flew away from the storm and over the flat landscape about 20 minutes to the landing strip near Chitabe.

Do I look nervous?

Tiny plane! We made it!

The landing was smooth, the sun was out, and there was a Land Cruiser waiting to take us to camp. Jonas, a guide in training, welcomed us, handed us the personal, chilled, reusable, stainless steel water bottles we would use during our stay, and drove us to camp. Along the way we had our first taste of safari in Botswana – open plains, savanna woodland, water, and lots of animals! Just on the drive to the camp we saw zebra, giraffe, impala, elephant, and baboons.

Still some clouds nearby. 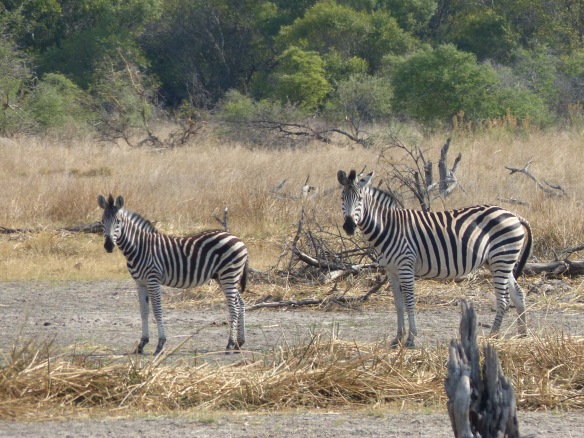 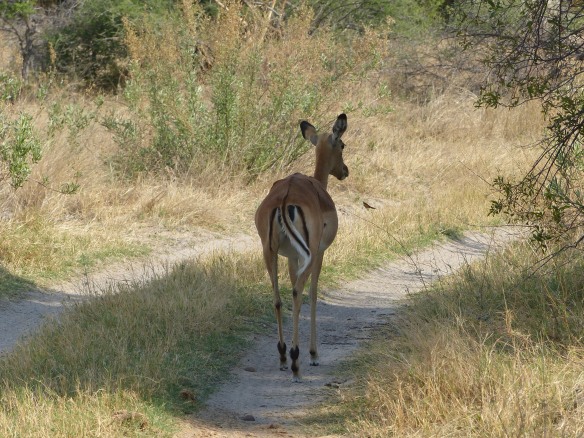 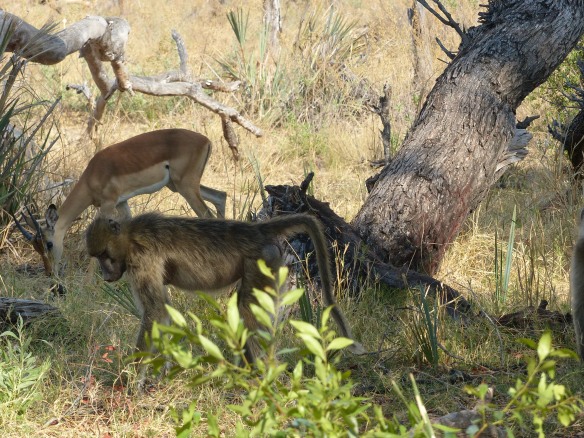 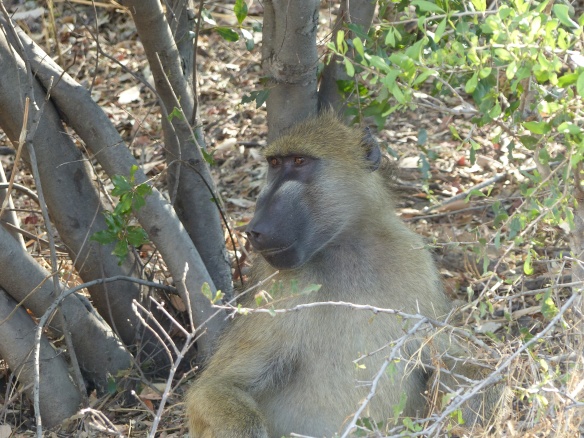 When we arrived at camp we were greeted with singing and warm hospitality. We were a good deal later than they had planned, but they still had tea waiting for us and we sat down with one of the camp managers to get oriented and learn the schedule. Then we were shown to our tented “room” to freshen up and urged to return soon to go out and join the afternoon game drive which was already in progress.

Since there was no WiFi or any access to the internet at Chitabe, I was unable to do any posting while there. However I did write a passage about our time and will share that along with more photos in my next post.

5 thoughts on “Botswana Here We Come!”