Life is pretty rewarding in the pursuit of an endless summer. Quite frequently, Michael declares gleefully that “endless summer” is the goal of our trip. Whenever the weather seems a little cooler, he says we’ll have to move further south soon! Indeed we have been blessed with warm days, sunny skies, and nary a need for a jacket. For the last month we have been basking in the autumn warmth of southern California, specifically La Jolla, near San Diego. Michael’s parents still live here in the house he grew up in, and we have taken over the basement guest room. Pretty nice digs if you can come by them! Most mornings I go for a walk along the cove and cliff tops to see what the ocean has to offer that day. Sea lions, pelicans, sea gulls, cormorants, and harbor seals are frequent companions, as well as a plethora of multilingual tourists. Michael goes off to surf at one of the nearby spots whenever the conditions are to his liking. Many afternoons we make time to go to the beach to top up our tans and breathe in the ocean air and sound of the waves. It’s a rough life, I know! In between these leisure pursuits, we’ve been spending quality time with family, reconnecting with old friends, and preparing to go overseas.

Here are some scenes from my morning walks. 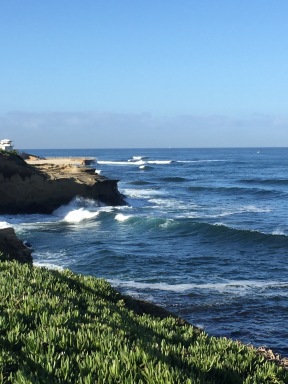 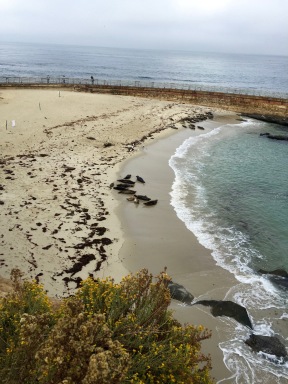 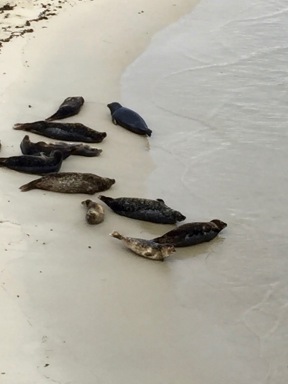 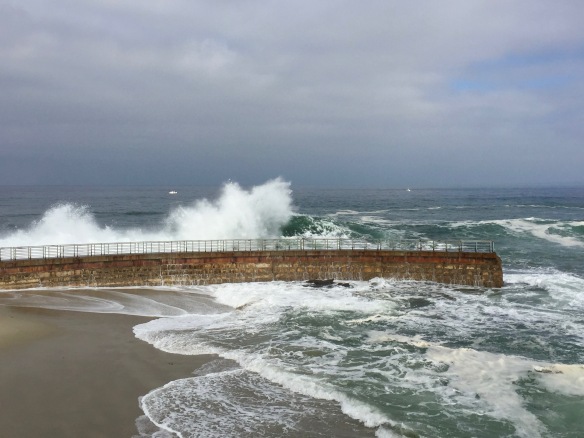 High tides and heavy surf make for a dramatic coastline!

While we’ve been lolligagging in San Diego, we’ve had a few small adventures of note. One weekend we camped at San Elijo State Beach in Cardiff-by-the-Sea. The campground is run by the state and the sites start booking out 6 months in advance, which is when they become available in the system. We had a stroke of luck back in March and secured a prime campsite right above the beach, close to the beach access, and just the right distance from the toilets.

The view from our campsite, #52

The campground also has showers, a camp store, and a taco shop. It is situated just across the road from eateries, a coffee shop, and a fantastic gourmet market called Seaside Market. So if you want to go minimalist on the cooking, as we did, it’s easy to eat well. The beach has a good surf break, so Michael was happy to have such easy access. It really was lovely to have the sound of the waves lull us to sleep and to witness  incredible sunsets each evening from the comfort of our picnic table or the beach below! 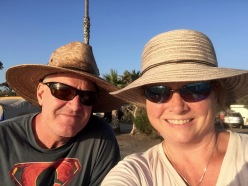 The only downside was the noise from the trains that blow through at regular intervals, including at night. During the day it was pretty easy to tune them out, but their whistles seemed incredibly loud at night when they woke us from a sound sleep! Our second night there, my friend Sandy joined us with her sweet dog Jax. We had a fun time roasting marshmallows and making s’mores by the campfire! 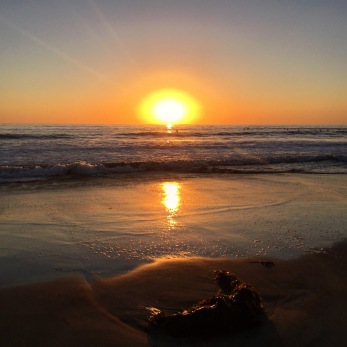 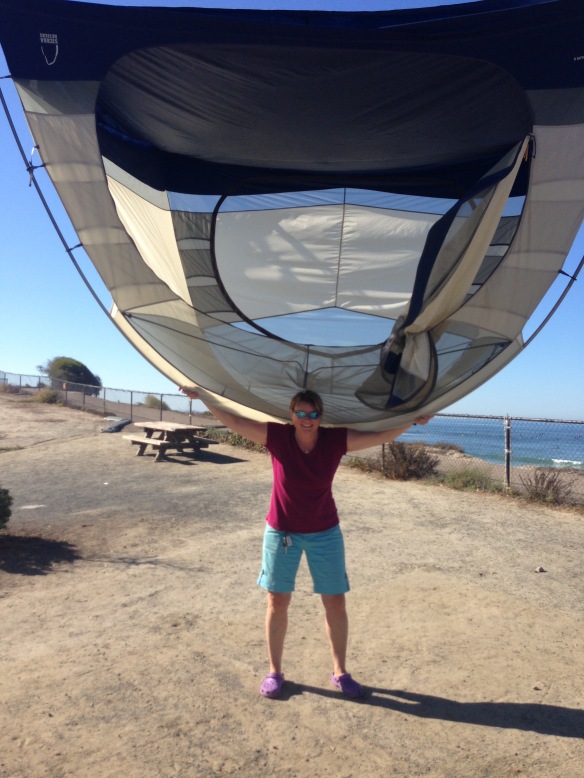 Shaking the tent out…Atlas holds up the world!

Another fun adventure consisted of riding our bicycles down to Pacific Beach from La Jolla. When we got to the boardwalk, we found a beach festival in progress with all manner of booths, crafts, beach volleyball tournaments, a surf contest, food, and bands playing. There was a “Best of the Beach” fish taco contest with entrants from local restaurants which caught our eye– $10 to sample 7 different tacos and vote on your favorite. What a deal! Of course we had to do it. Wow was it good! 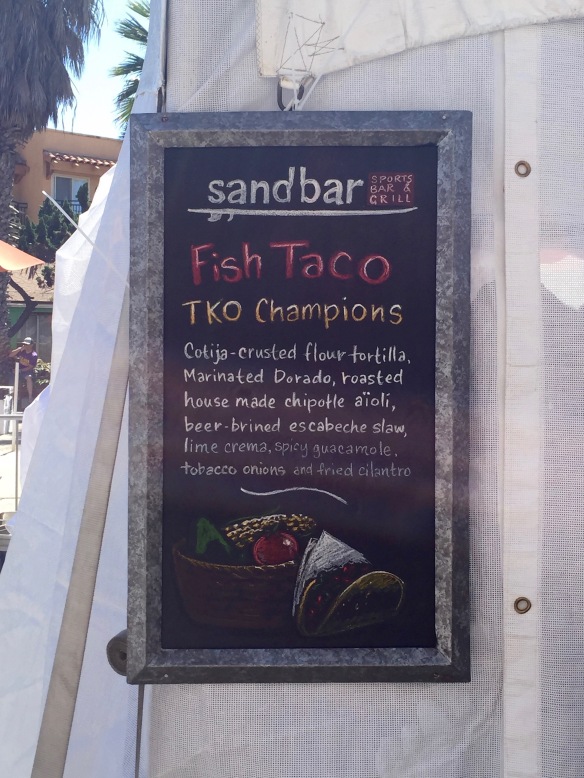 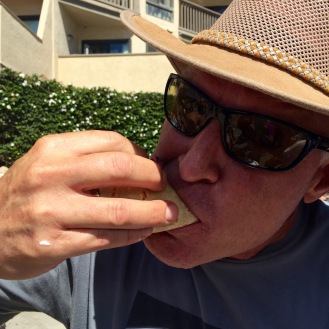 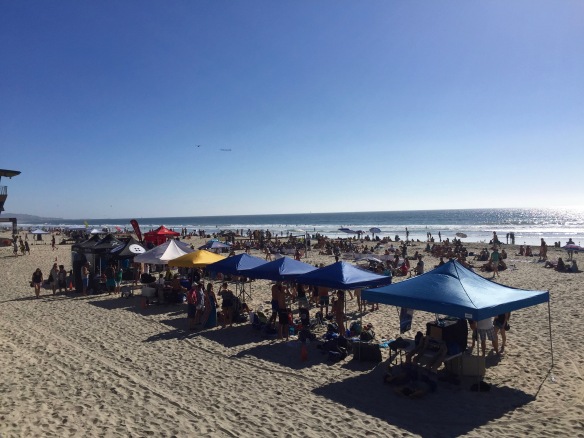 After sampling some tacos, we rode slowly down the boardwalk through Mission Beach all the way to the jetty at the end by the entrance to Mission Bay. The boardwalk was teeming with people and colorful characters, so it made for some superb people watching. That evening we went to a friend’s house for a barbecue.

Michael has been calling and catching up with old friends from high school, college, and even as far back as kindergarten! It’s been a particular pleasure to reconnect and get to know these people. There have been barbeques and snorkeling expeditions and we have plans for more visits next week. One Sunday we drove up to Newport Beach for the day to see one of Michael’s college friends. We really enjoyed spending the day with him and his family, going to the beach, and hearing about their lives.

A couple of times we have been in snorkeling by the La Jolla cove. The first was not so great due to poor visibility, but we did get inspected by a sea lion or two while in the water. The second time, the visibility was pretty good and the water quite calm. The cove is part of a marine preserve. There is a deep canyon in the ocean floor that comes quite close to shore at that spot, causing an upwelling, and making the marine life abundant. I spotted a leopard shark swimming  by. They are small and harmless and come to breed right off the cliffs there. As you may have guessed, they have spots! We also saw plenty of garibaldi, which are bright orange and look like very large goldfish. The young ones are greyish, with bright, electric blue spots! I spied a large abalone as well as a calico bass too. In addition to snorkeling, we have been enjoying regular trips to our favorite beaches, sometimes at sunset. 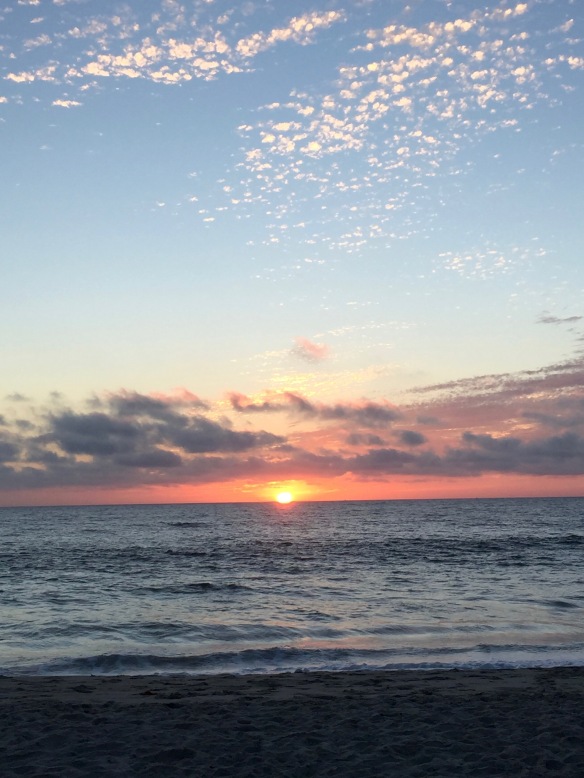 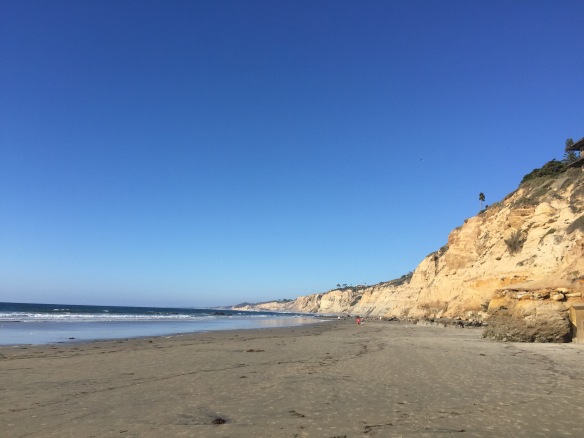 In three weeks we leave the country. Our first destination is the Cook Islands in the South Pacific, where we will visit both Rarotonga and Aitutaki, two of the many islands. We’ll be there about two weeks before flying on to New Zealand. In New Zealand we have about three months. We have made plans for roughly three-quarters of that time, primarily because it will be the summer high season when accommodation and transportation can book out. We’ll visit both the North and South Islands using a combination of holiday houses, airbnbs, backpackers, motels, bed and breakfasts, car, camper, ferry, and airplane. Just this week, we booked our onward flight from New Zealand to Melbourne, Australia using miles. That is as far out as we have planned, although we don’t foresee coming back to the U.S. for at least a further 3 months after that. Tentatively, we’ll visit Australia, Bali and Lombok in Indonesia, and wherever else may strike our fancy.

It’s hard to believe it’s mid October already! We have certainly been having fun and have tried to soak up every minute of our sabbatical from work. Now, as our departure on the big overseas trip approaches, we have been taking care of the final details of what we will take with us, how we’ll carry it, how we’ll manage our technology, and getting excited for the adventures to come!

See you down the road… 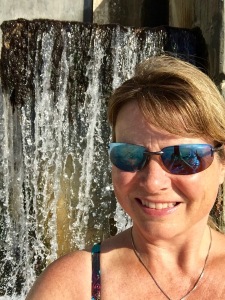