Patience is a virtue, or so they say. If this is the case, then you, dear readers, are all quite virtuous! We are now in San Diego, having crossed the country by plane and car with adventures and stops along the way. Unfortunately, I also encountered some technical difficulties which have delayed my posting to this blog. When your laptop no longer functions as a laptop but requires an outlet to plug into, and your campground has no cell signal, you just have to surrender to being truly unplugged! Nevertheless, I promise to catch you up on the comings and goings and share some of the beauty we’ve encountered on our journey from the Northeast to the Southwest of our country.

We spent at least another ten days in Massachusetts. The time was filled with more family visits and some weather dodging. One weekend we drove up to Cambridge to visit my brother-in-law and enjoyed a couple of days filled with excellent food, fine and abundant conversation, and a visit to the Peabody Essex Museum in Salem, Massachusets. Two small museums – The Peabody Museum and The Essex Institue were combined to create the Peabody Essex Museum.  My maternal grandfather, a Boston historian, was an assistant director at The Peabody Museum beginning in 1936, so it has family significance. I had not been to the museum in many, many years and in the intervening time, it has been overhauled to wondrous effect. There is an incredible, light filled atrium designed by Moshe Safdie, which gives the feeling of being on a ship with sails overhead. Even now, they are preparing to add another new wing! The museum contains a huge collection of maritime art and history; American art; Asian, Oceanic, and African art; Asian export art; books and manuscripts; and historic buildings. It’s origins draw from The East India Marine Society, founded in 1799 and described thus by the museum:

“…an organization of Salem captains and supercargoes who had sailed beyond either the Cape of Good Hope or Cape Horn. The society’s charter included a provision for the establishment of a “cabinet of natural and artificial curiosities,” which is what we today would call a museum. Society members brought to Salem a diverse collection of objects from the northwest coast of America, Asia, Africa, Oceania, India and elsewhere.“

What was most memorable from my childhood visits to the museum were the extraordinary number of shrunken heads! Now it has a broader scope and you can find galleries devoted to Chinese Export Art, Japanese Art, an Art and Nature Center, and special exhibitions. They have gotten rid of a lot of the shrunken heads. I suppose they were not terribly p-c! We wandered through a gallery of maritime art which had some fantastic model ships of varying shapes and sizes. We also visited a special exhibit of Childe Hassam, an American Impressionist. We didn’t make it to the Rodin exhibit. However, the main attraction of our visit was the Yin Yu Tang house. This is an antique Chinese house built around 1800 that stood for 200 years in a rural village in the region of Huizhou in southeastern China. It was dismantled piece by piece and reassembled at the museum. It is the only such house outside of China! This feat was accomplished through a cultural exchange agreement and a collaboration of Chinese and American experts. Now you can tour the house, learn about its history, and see it as it was last inhabited in the 1980’s by the Huang family, whose ancestral home it was. If you are interested in the Peabody Essex Museum, you can find more information at http://www.pem.org. It’s a pretty neat place!

Before leaving Boston to head back to my family’s summer home, we stopped on the waterfront to visit some old haunts from my years of living in “Beantown.” Here is the view of the harbor and the Long Wharf from the parking garage. We had sticker shock at the price of parking, but at least we got a view! 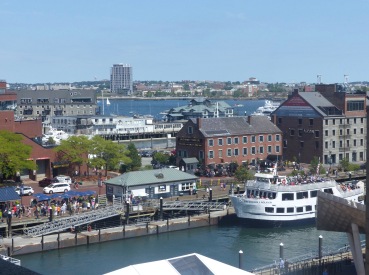 Faneuil Hall and Quincy Market were as busy as ever so we didn’t stay too long. We found the plaque dedicated to my grandfather, the same one from the Peabody Museum, at the foot of the statue of Sam Adams by Faneuil Hall.

We also walked through the North End, Boston’s old world Italian neighborhood, and passed by one of the places I used to live. It was the feast of St. Anthony, so there were parades with drum and bugle corps! 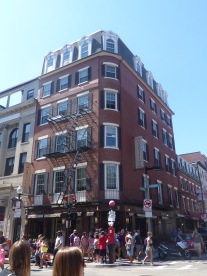 The building where I lived for a time

Michael spotted a boat with a name that epitomizes his dream for our sabbatical. We had to get a photo!

A lot has changed in that city but it still feels like home to a certain extent. I spent the better part of 10 years living there and then returned for a couple more later on, so it was fun to take a walk down memory lane! 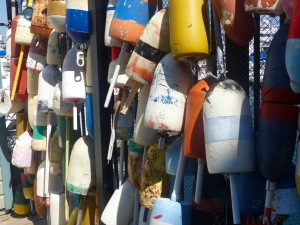 After returning to Nonquitt, we had a quiet week with my mother punctuated by dinner with old family friends at the house, and an evening out at The Back Eddy in Westport, a lovely waterfront seafood restaurant. The sunset was incredible that evening. 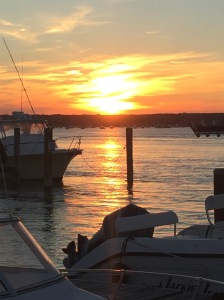 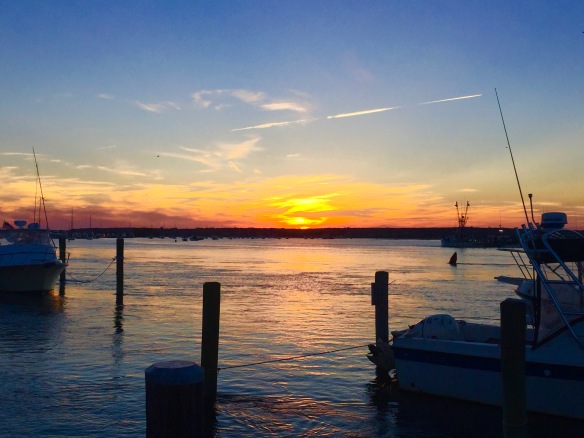 The weather continued fine, so we had many walks on the beach. We also rode bicycles down to Padanaram Harbor to view the boats and see how the causeway and bridge repairs were coming along. Closure of the bridge across the harbor, for what will be a multi-year project, was the subject of much discussion as it forces everyone in the vacinity of Nonquitt to take the long way around. 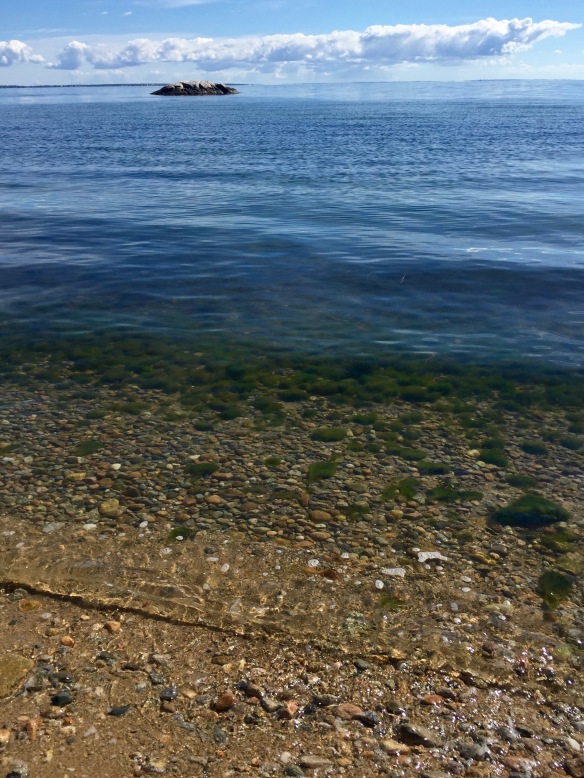 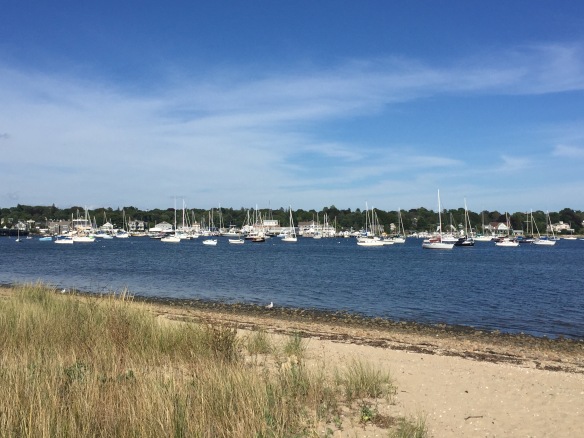 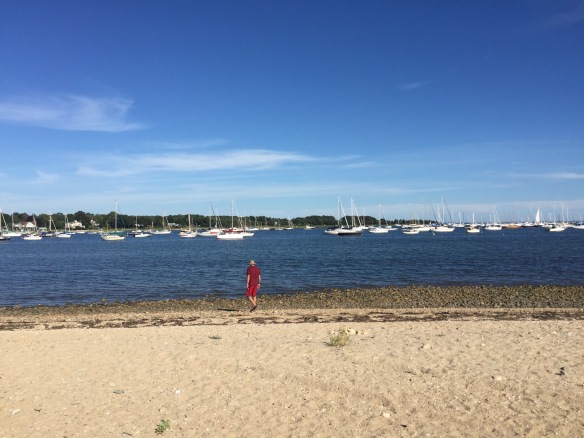 Over the busy Labor Day weekend we became rather more social, with cousins in residence next door and a communal beach barbeque. My nephew joined us along with my brother and his family, so the house was full. The weather forecast was less than encouraging with the remnants of what had been hurricane Hermine bearing down on us. The wind picked up, but the rain held off until Monday, which allowed the barbeque to go forward. We chose the prudent course and pulled my brother’s small sailboat off the beach. Here you can see the men performing their heroic duty with black skies in the background! 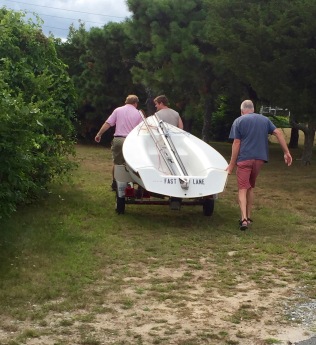 The storm brought choppy waters and high tides. Here are some shots of the newly enlarged inlet for the saltwater marsh which stretches behind our house and in back of the South Beach. Good thing they made it bigger as it seems to be at capacity already!

All in all, our time in Massachusetts was a pretty typical New England late summer idyl. We flew back to Denver after a rainy Labor Day and began the next stage of our adventure, which I will detail for you in my next post.

Until then, take care and I will see you down the road!

DepartureAugust 17th, 2016
And we're off! Departure from Durango.